DEFCON One (Most Severe) – The Nuclear Option Has Arrived

As of Tuesday, April 4, Senate Democrats have more than 41 votes for a filibuster on the Gorsuch nomination. Democrat support for the filibuster in this nomination is likely to end its use if additional Supreme Court openings appear in the next two years. 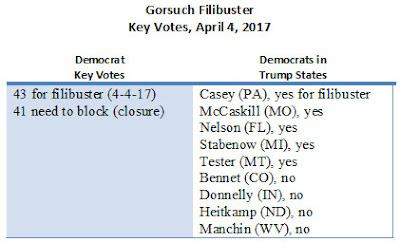 Michael Bennet joins only three Democratic colleagues who oppose use of the filibuster. As of Tuesday, there is only one senator undecided, Angus King of Maine.

In spite of political efforts to swing vulnerable Democrats to Gorsuch, Casey, Nelson, McCaskill and Tester came out for the filibuster. It indicates the power of the Democratic left to make the Gorsuch vote a litmus test. It also reflects the sense that a majority vote, not the filibuster, is now the rule for the Senate. Both parties have been moving toward it and the public is tired of delay and polarized elites aren’t interested in Senate tradition.

Republicans are united on approving Gorsuch on the court, which will overwhelm any reservations of Senate institutionalists that the filibuster is a historic feature of the Senate’s deliberative process and protection of the minority parties (which they will become in future).
Posted by Floyd Ciruli at 11:39:00 AM