Bannon About to Join Flynn?

“It reminds me of the heady days of Sputnik and Yuri Gagarin when the world trembled at the sound of our rockets. (Captain Ramius, The Hunt for Red October, 1990) 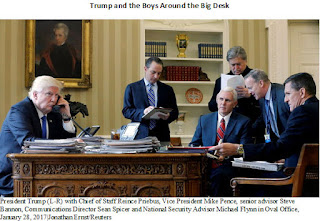 Those were heady days when the boys were gathered around the Resolute Desk listening as President Trump spoke to President Putin.

Will it make a difference without Steve Bannon in the picture? If General Flynn had been handling national security, launching Tomahawk missiles and moving the Carl Vinson, the optics, if not the policy, would be much different. And, the national anxiety levels a lot higher.

Much of what Bannon stands for, his economic nationalism and anti-establishment populism has begun to corrode.
In a series of interviews and actions, Trump has reversed or significantly deviated from positions on a host of his and Bannon’s previous positions. Then in a New York Post interview, he backed away from Bannon himself.


“When I asked the president Tuesday afternoon if he still has confidence in Bannon, who took over the campaign in mid-August, I did not get a definitive yes.

‘I like Steve, but you have to remember he was not involved in my campaign until very late,’ Trump said. ‘I had already beaten all the senators and all the governors, and I didn’t know Steve. I’m my own strategist and it wasn’t like I was going to change strategies because I was facing crooked Hillary.’”