At a recent Colorado business conference, a participant from an agricultural community along the South Platte River expressed her dismay with Biden and Democrats for “paying immigrants to cross the southern border to vote in our elections.” A frequently discussed variation of the so-called replacement theory in conservative and rightwing media. A recent national poll shows it’s not a fringe view of just a handful of extremists. Six out of 10 Donald Trump voters (61%) agree that a “group of people in this country are trying to replace native-born Americans with immigrants and people of color who share their political views.” (Yahoo News, 5-24-22). 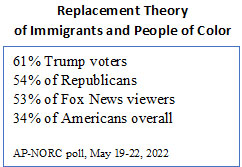 The Colorado speaker had a number of other speakers who agreed.