How Will Unaffiliated Voters Affect the June 28 Colorado Primary?

Colorado’s June 28th primary will likely be a low turnout affair, with only high-profile primaries in Republican races. In the 2018 primary, about 400,000 Republicans and 100,000 unaffiliated voted in the governor’s race, giving Walker Stapleton the win. Greg Lopez, who’s on the ballot again, came in a weak third with only 66,000 votes.

This year, the two highest-profile Republican statewide primaries are for U.S. Senate and Secretary of State, both of which have Donald Trump-aligned election deniers at the top of their respective ballots. Also, three congressional races will generate higher interest – the 3rd with Lauren Boebert challenged by Don Coram, the 7th open seat with the retirement of Ed Perlmutter, and the newly created 8th Congressional District in the north Denver metro area extending up to Greeley. 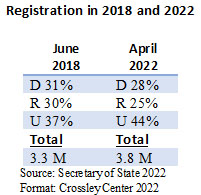 In Colorado’s universal mail-back voting, all 1.7 million unaffiliated voters will get a ballot. About 290,000 voted in 2018. Will some more liberal members vote in the Republican primaries to oppose Trump-like election deniers (or less likely, to vote for the weakest Republican candidate)? Unaffiliated voters in the 3rd district are being solicited to vote for Coram and defeat Boebert, the high-profile controversial candidate.

I will ratfucking the GOPer primary.
Go Tina!