In a June 22 KOA interview with Marty Lenz, the June 28 Republican primaries were described as a battle for the soul of the party.

I pointed out that the November election is likely to be a good year for Republican candidates, and primary voters are being asked: Do you want the strongest candidate to appeal to Colorado unaffiliated and swing voters or the loudest candidate to express your grievance with the 2020 election?

In the Senate, gubernatorial, and Secretary of State races, high-profile election denier candidates lost the Republican Party primary after winning the state convention’s top positions: Ron Hanks (Senate), Greg Lopez (Governor) and Tina Peters (Secretary of State). Donald Trump and his 2020 election denial is a losing position among Colorado Republicans. The party will field its establishment-endorsed and supported ticket for November. 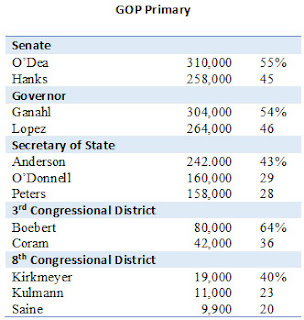