Both Parties Have Become More Extreme

Elon Musk recently tweeted a cartoon that received millions of likes. The cartoonist is Colin Wright, who is in university research and dealing with the left-wing university policy. He states he was a center-left liberal and now feels like a center-right conservative. Many people offered their own paths of alienation from their parties, including from the far-right. 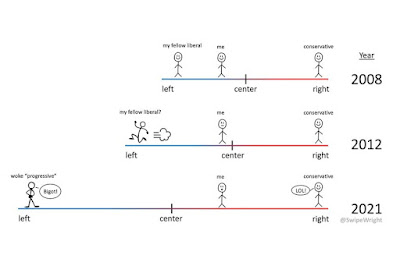 Another way to consider Wright’s observation is to examine ideology within the two political parties and independents. Democrats have indeed become more liberal during the Obama and Trump eras, moving from 39 percent liberal to 57 percent. Barely 10 percent of Democrats now claim to be conservative, down from 21 percent in 2010, but a third of the party (35%) still describe themselves as moderate.

Republicans are more uniformly conservative and have been so at the 70 percent level for the entire decade, which includes the Tea Party movement after 2009 and MAGA after 2017. In 2020, 75 percent of Republicans said they were conservative with 30 percent moderate and only 4 percent claiming to be liberal.

Nearly half of independents claim to be moderate with 20 percent liberal and 29 percent conservative (conservative declined by 7 percent over the decade).

Wright’s cartoon captures the movement of the Democratic Party in the last 10 years, but not the uniformity of the Republican Party’s conservative ideology. What he’s mostly reflecting is the social media and online niche platforms that reinforce the most extremes of the parties’ activists. 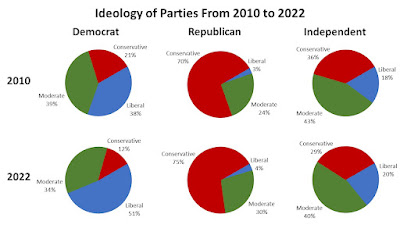