Trump Loses a Fifth of Republicans in Handling Helsinki

The latest CBS national poll shows only 32 percent of Americans approved of President Trump’s handling of the Helsinki summit. That is an exceptionally poor rating for a major foreign policy performance (Washington Post poll – 33%). An even bigger problem for Trump is that only 68 percent of Republicans approved his performance (66% in Washington Post poll). The history of Trump’s controversies suggests his approval rating won’t be affected, but the worldwide media coverage was significant and the broad judgement that his performance was weak may produce a longer-term effect.

Trump’s overall approval depends on about 85 percent of Republicans (87% in Washington Post poll), so Helsinki’s 68 percent is a loss of about 20 points of support, or about a fifth of self-identified Republican partisans. This drop-off highlights two facts. First, there are Republicans who can be persuaded to withdrawal approval of Trump’s behavior. Second, the Republican label is held by a variety of partisan groupings, including evangelicals, Tea Party, old-line establishment, forever Trump and never Trump to just name a few. For some, affection for Trump is primarily a policy preference (tax cuts, Supreme Court appointments) and an aversion to the alternative (Hillary Clinton most recently).

As the Helsinki approval table below (from Washington Post data) shows, Republicans only represent about a quarter of the electorate and Trump can ill-afford to lose any. 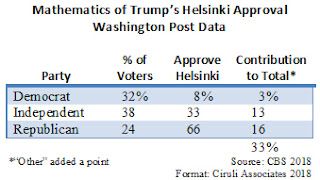 Other polls that show lower percentages of independents and more Republicans still require super majorities of Republicans approving Trump to maintain his anemic approval rating of 42 to 45 percent.

A recent Reuters/Ipsos poll graphically shows the Republicans’ vulnerability to Trump’s periodic missteps. Out of the 82 percent Republican support, they record 50 percent “strong” approval, but 32 percent “somewhat” approve (note: another 3% “lean toward” approval). Nearly two-fifths of the party is weakly attached to Trump. Those are the voters who could stay home or walk away from the party.