Beyond the Base. What Do We Know About the Unaffiliated Voters?

Colorado’s two main parties are within a few thousand registered voters of each other. In an off-year election. Republicans typically have higher turnout, but this off-year election appears to benefit Democrats in its anti-President Trump passion. The largest bloc of voters in Colorado is unaffiliated. Neither party can win without them, so how they break between the two parties will likely decide the election.

Two recent voter polls – one done before the June 26 primary and one robo poll done immediately after – seem to give the Democrats a 5-point or more overall advantage and an even larger one with unaffiliated voters.

Trump’s favorability and approval is low among unaffiliated voters in both Kent Thiry’s Let Colorado Vote and the Democratic Party’s PPP poll.

Trump nationally has about a 40 to 45 percent approval and 50 to 55 percent disapproval. His unfavorability is similar. In the PPP survey, it appears Colorado unaffiliated voters are at the low end of the range. The Let Colorado Vote poll had unaffiliated voters substantially more critical of Trump.

In both surveys, Republican Walker Stapleton is behind. The Let Colorado Vote poll only measured favorability and has an unusually large difference between the two candidates. Note that Polis is known by 67 percent of the voters and Stapleton by less than half (46%). In the PPP poll, Republicans start about 7 points behind. The unaffiliated spread of 12 points is a serious problem for Republicans. It may reflect the flood of new, younger, liberal-leaning voters who rule the electorate who have chosen the unaffiliated label. 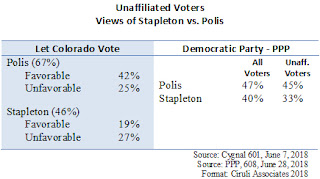 The Stapler's unfavorable rating is very high for a guy who is basically unknown.