A new FOX News poll shows a Democratic advantage in voter enthusiasm for the November election. The poll aligns with the RealClearPolitics 8-point spread Democrats have today in the generic ballot test. 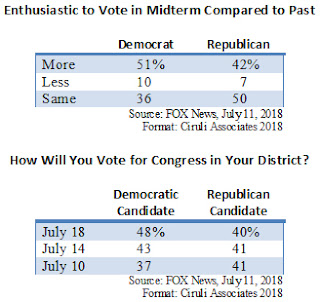 This is mostly based on an anti-Trump sentiment because when asked if the Democratic Party has a “clear plan for the country,” only 31 percent of public said yes. Republicans get 38 percent for having a plan (49% of Democratic partisans and 65% of Republican partisans thought their party had a plan).
Posted by Floyd Ciruli at 9:40:00 AM