The latest Morning Consult state-by-state presidential approval ratings are out and show a 17-point drop in President Trump’s approval in Colorado since his inauguration in January 2017 through July 2018, with a 13-point negative approval today. Trump is nearly at the national average in Colorado with an approval of 42 percent. He has a slightly higher disapproval at 55 percent than the national average of 53%.

Trump has dropped in approval in every state in the union since January 2017, but he still has a positive net popularity in many states, including many Mountain and High Plains states. 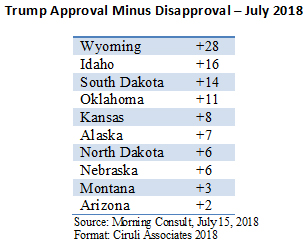 Although the election is more than three months away, midterm elections tend to be about voting against, not for things, and Trump will be the issue in all federal races and probably in many state elections. With a negative 13-point rating, Trump is unlikely to be of much help to Colorado Republican candidates in competitive races.
Posted by Floyd Ciruli at 10:52:00 AM

Sadly, those 9 states with no people get 18 Senators.