Trump Approval Weak, But Better on Economy Than Foreign Policy 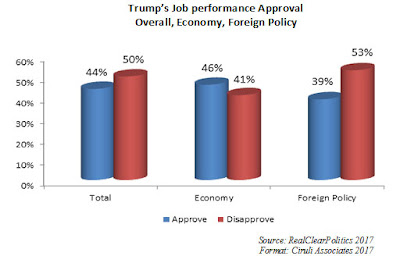 Not surprising, on foreign policy his approval is only 39 percent and disapproval is a high 53 percent. It is foreign policy with the roll-out of the refugee ban, the war of words with Mexico over the wall and paying for it, and sacking General Flynn that has produced the most negative headlines. Even with his well-regarded cabinet appointments at state and defense, there appears to be a divergence in policy with Trump on the EU, NATO, Russia and Iraq oil. Foreign policy was also the area that garnered the most resistance during the campaign from the establishment of both parties. And, it’s the area Trump is seen as the least experienced and most ill-suited in terms of temperament, with several highly opinioned unorthodox advisors (Bannon, Miller, Flynn, Gorka).

Trump has the jobs message down. It is foreign policy where his message sounds mostly confused and risky.
Posted by Floyd Ciruli at 1:01:00 PM