Early Returns: Gorsuch Gets to 60 and Colorado’s Two Senators Support Him

First impressions are important. Neil Gorsuch’s education, legal career and reaction from the early round of Senate interviews appears to bode well for him getting at least 60 votes, which cuts off a filibuster.

Typically, from nomination to Senate confirmation is about three months. Hence, by April this nomination should be ready for a vote. Hearings tend to take 4 to 5 days. Justice Scalia had two days of hearings, but Alito had five and Roberts four.

Obviously, some issue could arise over the next several months of investigation, interviews and hearings to derail the nomination, but as of now, he appears to fit into mainstream on the conservative/libertarian side of court. But, the Democratic Party could continue toward its strategy of total resistance and drag its Senate members with it.

Nearly all of President Obama’s, Bush’s and Clinton’s judges got more than 60 votes for confirmation. Justice Alito received 58 votes (60 votes needed to proceed to confirmation under current rules, simple majority to be confirmed). 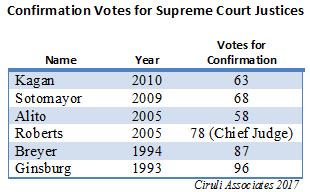 Justice Thomas received only 52 votes after his difficult 11 days of hearings in 1991. The only defeat in recent years was Justice Bork in 1987, who received only 42 votes. President Bush had to withdraw a nominee, Harriet Miers, in 2005 and, of course, Merrick Garland did not get a hearing in 2016.

Judge Gorsuch could have a very long term on the Court. Scalia was 50 years old when he entered the Court and 79 at the time of his death last year. Gorsuch is 49 years old and could serve for three decades if he follows in the average age of retirement in recent years, which is 79 years old.

As a highly qualified appeals court judge and Colorado native, Senator Michael Bennet will be hard-pressed to not join his colleague, Cory Gardner, and vote to consider and vote to confirm. Early polling shows Gorsuch’s nomination by Trump receiving a 50 percent approval, and most importantly, two-thirds (65%) of the public believe “Senate Democrats should allow a vote on the nomination.” Hence, although Democrats are angry about Judge Garland not getting a hearing, it’s been more than a year without a justice and more delay will become a potent argument to get the process done.

See:
The Buzz: Neil Gorsuch pulls Trump out of ditch
Quinnipiac University poll, Feb. 8, 2017
Posted by Floyd Ciruli at 9:54:00 AM