A new poll reaffirms what conversations from Wall Street to main streets, Capitol Hill to state capitols repeat: Even if you like some of Donald Trump’s policies and cabinet picks, the White House is a chaotic mess. The Flynn resignation is just the most dramatic incident in three out-of-control weeks.

But the selection of Neil Gorsuch Tuesday, February 1, was a calm moment in a sea of turmoil, which most Republicans would like to see repeated and polling seems to agree. Gorsuch has a 51 percent approval in a new national poll (Feb. 3-36, 2017) with 39 percent disapproving. The latest Gallup poll has President Trump at 40 percent approval and 55 percent disapproval, a drop in Gallup numbers over the three weeks of 15 points. 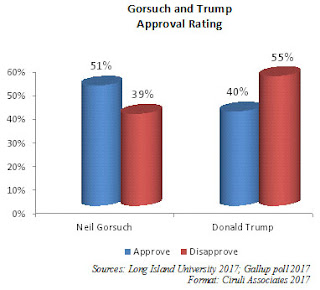