As the Affordable Care Act (ACA) has become less “Obamacare” and more in danger of disappearing, it has become more popular.

As ACA repeal appears near, the public is shifting toward more affection for it. Several recent polls show its popularity, never very high since its passage in 2010, is now even between the public’s approval and disapproval (45% to 45%). That reflects a shift to the positive side since January of this year. The ACA has been more than 10 points negative since 2013 in the Wall Street Journal/NBC polls and is now 43 percent “good idea” to 41 percent “bad idea.” 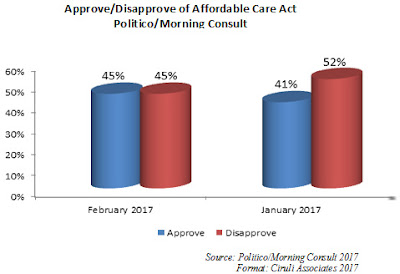 As Barack Obama’s ownership of it fades with his retirement, the “care” part of the act has become more valuable. Its value is highlighted as congressional Republicans are struggling for a replacement. The political risk is unavoidable when hundreds of citizens and activists show up at town meetings warning of the consequences of repeal leaving large numbers of people with inadequate or no health insurance.

The number of persons wanting to repeal the law in its entirety in this poll was only 24 percent, with an equal number, 26 percent, wanting to expand it. Twelve percent want to keep it as is. The balance of power with 27 percent was those who just want to repeal parts of it. 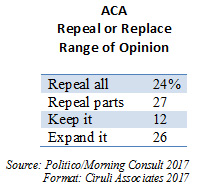