On a variety of scales, Colorado remains a competitive two-party state. For example, Gallup records Colorado as competitive in its 2016 fifty-state ranking of partisan affiliation. Nationally, partisanship is 47 percent Democrat and 42 percent Republican, or a five-point Democratic advantage. Colorado is cited as competitive with a less than one percent advantage for Republicans. Fourteen states are listed competitive, including Arizona, Nevada, Georgia and Virginia.

In terms of liberal and conservative ideology, Colorado is considered centrist in a fifty-state list, with 35 percent stating they’re conservative, 36 percent moderate and 26 percent liberal. But, it is on the more liberal end of the scale and the scale has moved to the left in recent years. Colorado’s position is confirmed by the shift in attitudes during the last decade toward legalized marijuana, which was defeated as a ballot proposal in 2006 by 59 percent and approved in 2012 by 55 percent. Also, a civil union initiative was defeated in 2006 by 53 percent, but passed by the state legislature in 2013, and polls showed it had 71 percent of Coloradans’ support (Quinnipiac 2013).

Although Colorado remains competitive between the two parties, as shown by candidates representing the two parties winning statewide races and splitting control of the state legislature, in fact, the state has moved at least two points to the Democratic side of the scale since 2006. This is most clearly shown in terms of registration and voter behavior in presidential elections. Republicans have lost their registration advantage. Voters not affiliated with a party are now the largest political group in the state, and polling shows they skew younger and somewhat more liberal and Democratic.

Viewing the presidential races since 1996 shows Colorado shifted to the Democratic side with Barack Obama’s first election and remained in that camp through the 2016 Clinton election. 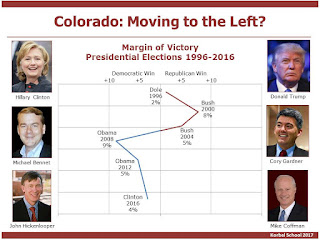 The next major political race in Colorado is for governor. The ebb and flow of Washington politics and the quality of local candidates will frame the race. And although Republicans could win it, at least the early numbers suggest Democrats have a slight advantage.

See Gallup: GOP maintains edge in state party affiliation in 2016
Posted by Floyd Ciruli at 10:34:00 AM