Two elections took place November 8. Trump won 13 swing states as computed by Charlie Cook on his website by about 800,000 votes (Trump won 8 and Clinton won 5). But, he lost the popular vote in the remaining 37 states and D.C. by 3.7 million votes, leaving him behind by 2.9 million.

U.S. presidential politics is a blend of votes and geography. Much of Clinton’s advantage came from a handful of states and large cities. Greater Los Angeles, New York, Chicago, D.C., and Atlanta delivered overflow votes. But, Democrats’ urban strength did not make up for the Trump solidarity in the white working class and voters in small towns and rural areas. Philadelphia, Atlanta and Miami did not deliver Pennsylvania, Georgia or Florida.

Democrats swept California by 61 percent, or more than 4 million votes. But their overflow voters in California was superfluous. The significant concentration of the Democrats in a handful of states led to the Electoral College failure and contributes to their weak position in the House of Representatives. 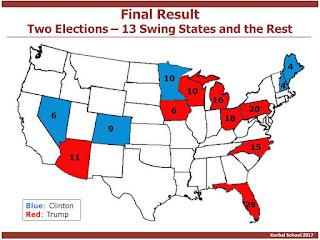