Do Colorado Democrats have a Firewall Against the Republican Surge Building?

Hillary Clinton believed she had a firewall in 2016 in the upper Midwest, but then she lost Wisconsin, Michigan and Pennsylvania. In 2018, Colorado Democrats swept Colorado by 10 points or more in statewide offices, won a new congressional seat and took even firmer control of the state legislature. Republicans did even worse in 2020, losing the presidential election by 12 points (more than 2 times the loss in 2016) and their senate seat by 10. Do Democrats now have a firewall? 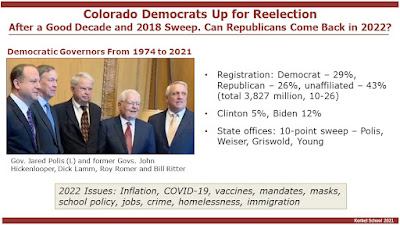 The Virginia and New Jersey gubernatorial elections last November were warning lights that the big partisan wins a year earlier may not stop an electorate angry at Washington or wanting to send a message for change? President Joe Biden won Virginia by 10 points and New Jersey by 16, but the Democratic candidates lost in Virginia by 2 points and held on in New Jersey by 3. Biden’s low approval, new COVID-19 variants and a sharp increase in inflation are major burdens as the 2022 campaigns begin.

The early D.C. prognosticators have both Senator Bennet and Governor Polis as likely winners, rating the state overall leaning Democratic, but Democrats are wary, as they should be. Federal officeholders are especially vulnerable to national trends. Bennet’s wins have not been impressive (2 points in 2010, 6 points in 2016) and Democrats will be in a major fight to take the new congressional seat (8th) and to hold onto at least one vulnerable district (7th).

Read The Buzz:
Can Colorado Republicans Ride the Red Tide?
Democrats Begin the Year Way Behind
Posted by Floyd Ciruli at 9:54:00 AM