Is a Woman to Be the Next Mayor of Denver?

After 45 men have served as Denver mayor since 1859, it appears the time may be near for a woman to get the job. Out of nine early candidates mentioned in recent reports and conversations, six are women.

Is Denver at an inflection point? There is a sense the city is ready for a major, not just a mayoral, change. A new generation of voters is influencing elections. After 12 years, Mayor Michael Hancock is term-limited, and the city election is slightly more than a year away. It’s getting close to the time potential candidates, their handlers and supporters begin to test the waters. What does the early field look like? The city’s economic and civic stakeholders are scanning it for candidates that reflect their positions, which tend to be centrist and pragmatic.

A handful of candidates are subject to speculation about running for Denver’s mayoral seat in 2023. All the candidates are liberal, but the list runs from center-left to extreme left. Many more candidates may enter the race, and those listed below may try to adjust their ideological positions, but early impressions are: 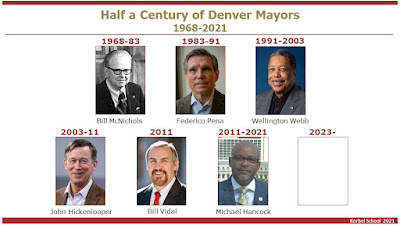