Democrats Begin the Year Way Behind

Since August as the Afghanistan withdrawal collapsed and the Delta variant surged, The Buzz has tracked President Biden’s approval decline and the growing and now near universal sentiment among political experts that the Democrats will lose the House of Representatives.

Although Biden’s approval appears to have bottomed out for now at 43 percent with a 7 percent negative tilt, it is accompanied by a Republican 3 percent advantage in the generic ballot test, which projects doom for the Democrats’ majority in the midterm election. Along with the relentless covid pandemic, now morphed into the Omicron variant, Biden is dealing with inflation raging at 7 percent, the highest in many voters’ memories (1982 CPI, 1991 core prices) and no relief is in sight. 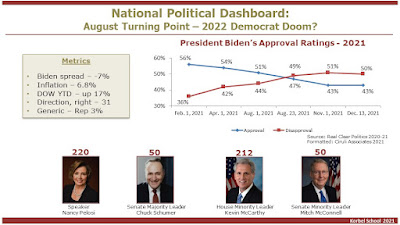 The national political environment effects state politics. It just helped Republicans in Virginia and New Jersey. Will Colorado Republicans be able to take advantage of the favorable national conditions? Can they mount effective campaigns in Michael Bennet’s senate race or the two most competitive congressional seats – Ed Perlmutter’s 7th and the new 8th – or any of the statewide offices that Democrats now hold?

All of these issues will be explored on a Crossley Center for Public Opinion Research panel on January 13, 2022. See The Buzz: 2022 Colorado Election: Trends and Predictions.