After a chaotic petition campaign, it now appears a field of two candidates a few weeks ago is, after a series of court decisions, a field of five going into the June 28 primary.

Alexis Levinson in the National Review (May 26, 2016) points out Colorado is one of only two states where Republicans can pick up a senate seat (the other is the open Nevada seat of Harry Reid). But as she reports, the field of five little-known Republican candidates makes it unclear someone will emerge who can be competitive against well-funded Democratic incumbent Michael Bennet.

The 400,000 or so Republican primary voters will be substantially more than the 60,000 who turned out to select delegates in the presidential caucus. But, they will be sorting out a field of candidates with no statewide visibility or election experience beyond city council and county commissioner races.

Although Robert Blaha and Jack Graham are spending the most for TV advertising, there is still a lack of direction in the races as of June 1st.

Could Senator Bennet be beaten? Yes, but will the Republicans nominate a credible challenger? Unknown. 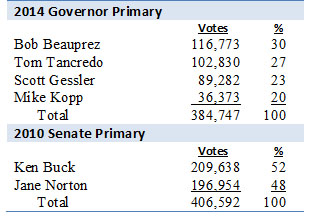 
Big-name Republicans and outside groups have thus far declined to play powerbroker to boost any one candidate. Without a Gardner-like figure to rally around, “the Republican party doesn’t have a real sort of sense of direction at the moment,” says Ciruli. Gardner, for his part, says he’ll wait to get involved until after the primary.