Neither political party seems excited about their presidential choice, although both parties appear to be slowly accepting their nominees in spite of difficulty in unifying and the likelihood of raucous conventions. As the candidates close in on their nominations, their differences are thrown in high relief. Why are Democrats staying with an insider and old party stalwart, Clinton, and Republicans breaking toward an outsider, Trump?

Of the many metrics that frame this election, three explain the insider/outsider dichotomy. They are voters’ level of interest for someone with political experience, the amount of political change preferred and the degree of political trust in government.

The differences Democrats and Republicans have on the three questions are dramatic and instructive. A new Ciruli Associates survey in the Denver metro region shows most Democrats prefer a politician with experience (75%), want some but not major change (50%) in policy, and a majority trust government always or most of the time (60%). Whereas Republicans are the inverse. They are ambivalent of political experience (39% yes experience, 38% no experience), want major changes (69%), and seldom or never trust government (72%). 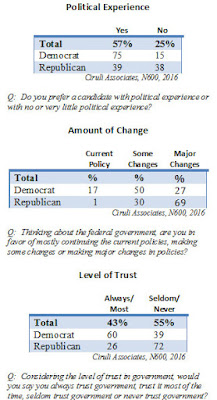 Survey conducted with 600 likely voters in the seven-county Denver metro area by Ciruli Associates in May 2016 with a plus or minus of 4 percentage points.
Posted by Floyd Ciruli at 10:16:00 AM

Nothing such as Faux News to completely screw up GOPer's brains.