Denver Growth on a Tear

Denver has retaken the lead as the largest county in the state, sweeping past El Paso County by 8,000 residents, according to the 2015 U.S. Census Bureau population estimates of July 2015.

After a couple of decades of stagnant population growth reflecting suburbanization, Denver grew an extraordinary 82,387 residents since the 2010 census, a nearly 14 percent increase. The city now has 682,545 residents as of last July, up 18,582 in one year (since the July 2014 estimate).

The City and County is the leader in the statewide population surge that has made Colorado the second fastest growing in the country. (Colorado now 5.5 million people, up 101,000 since 2014, mostly from new residents moving to the state.)

Denver’s growth leads the seven-county metro area, with Arapahoe and Adams in second and third positions. Boulder and Jefferson counties lag the field of larger counties. Broomfield, as a small community, only added 9,000 residents in the five years, but its rate of growth of 16.4% was the highest of larger counties. Denver was second with 13.7%. 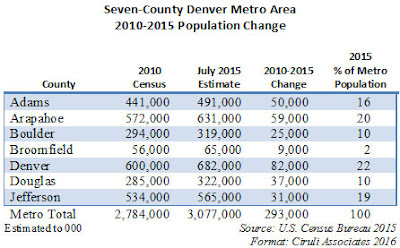 I love living in the Socialist Paradise of the City & County of Denver.