Two new Gallup polls show that, although the favorability of the Tea Party has dropped to 30 percent down from 47 percent in early 2011 after its considerable influence in the 2010 election, the public increasingly agrees with one of its key political views that government is the “biggest threat to the future of the country.”

Between the Affordable Care Act and the meta-spying of the NSA, combined with dislike of Washington D.C. in general, government as a threat to the future of the country is at an all-time high (72%). 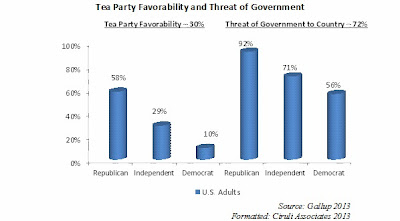 Only 22 percent of the public claim to be Tea Party supporters, down from a high of 29 points in early 2011. On the other hand, the Tea Party has been a major contributor to focusing light on the growth and danger of government, which is the issue Republicans will run on in 2014.

The challenge for Republicans is that, although smaller in number, the Tea Party remains a major influence in the party with 58 percent of Republicans rating it favorable. But intransigence and perceived extremism of the Tea Party for shutting down the government and not compromising on the recent budget deal is widely seen as harmful to the Republican election chances in 2014.

The GOP must find a strategy to avoid the Tea Party’s reputation as extreme, but benefit from its credibility as opposing the growth of government. Fortunately for the GOP, the Obama administration’s handling of the Obamacare rollout and NSA spying is creating opportunities.

One other Gallup poll sheds light on the 2014 election environment. The Republican Party remains on the defense as its reputation is at an all-time low of 28 percent favorable with the American people. It is only 47 percent favorable with conservatives; that is, many Tea Party activists don’t respect it. But the bad news for Democrats is that although they have 42 percent favorability overall, that percentage is equal to their favorability going into the disastrous 2010 election.