Campaigns are important, but Colorado’s political environment is sufficiently balanced that good or bad news from Washington can change the calculus quickly for federal officeholders.

Democrats during most of 2013 were leading the generic congressional ballot test, and during the shutdown debacle, surged ahead by 8 points, a sure sign that 2014 could have added Democratic seats, possibly even restore Democrats to power in the House. Today, Republicans are up one point, a bad sign given Republicans have a slight edge in a non-presidential year turnout. Could Democrats now lose six seats and control of the Senate?

In Colorado, President Obama’s approval deficit and the significant collapse of Obamacare as a perceived desired program have buoyed politicians, like Congressman Mike Coffman who is seen as vulnerable in his fiercely contested district.

And, the Democrats’ problems have put Senator Mark Udall, thought to be heading to a comfortable re-election, on the watch list. 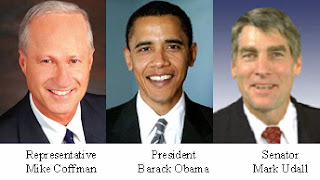