Reform of education is a lot like red sauce – there are many similar ingredients, but every nonna has a recipe. From Denver’s more liberal big city version to Douglas County’s wealthy district conservative version, reform is tailored to the local culture, but a Ciruli metro poll shows there are some similarities: 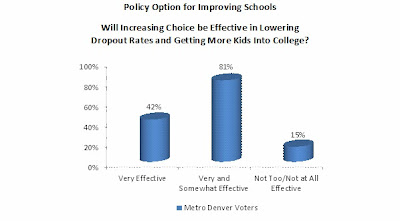 The majorities that believe choice is an effective elixir for improvement in dropout rates and college acceptance contain extra high proportions of minority voters who have soured on the public system. For example, 54 percent of Hispanic metro residents believe choice is “very effective” and 61 percent of African Americans (42% of public overall).

Democratic politicians are increasingly sensitive to the rhetoric of reform being taken to mean “anti-union” positions, especially now that suburban reform movements are taking hold. Unfortunately, trying the rebrand the effort won’t be easy. Teachers and public education households are far less anti-choice than their national and local union leaders, who remain inexorably opposed to the key elements of “reform,” namely choice and merit