Barack Obama’s final press conference was framed by his weak poll numbers, “Was 2013 your worse year?”

He is slightly below where President Bush was at the start of his disastrous 2006 midterm election year, and Obama just hit his all-time high disapproval. 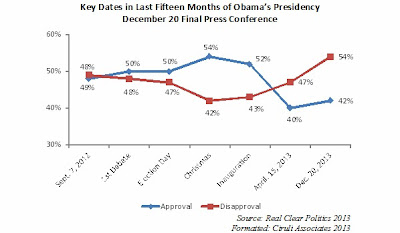 The ACA rollout and “If you like your health care plan, you can keep it” cost Obama’s personal credibility. The question is will it affect Democrats among the 35 Senate seats, 435 House seats and 36 governorships up next year?

Projecting the impact of the President’s low approval today to November 4, 2014 has limitations. Ten months is several lifetimes in politics, and the advantage, as the few weeks between the government shutdown and the Obamacare rollout demonstrated, can shift quickly.

As this website has documented, politics is becoming more volatile in the age of polarization, with an increasing percentage of voters choosing independence and moving quickly between media covered events, foreign and domestic. Also, there has been a downward shift in voters’ opinions toward the federal government. Low regard today is not comparable to low regard in 2006 as President Bush approached his last midterm. For example, the metrics of right direction and wrong track and now the approval of Congress are double-digit lower.