A new Pew Research poll compares Republican voters’ outlooks on the 2014 midterm election to attitudes before the big Democratic win in 2006 and prior to the huge swing back to Republicans in 2010. In both cases, the speakership changed parties. The GOP rank and file’s 2014 expectations are upbeat, but not at landslide proportions like 2010. 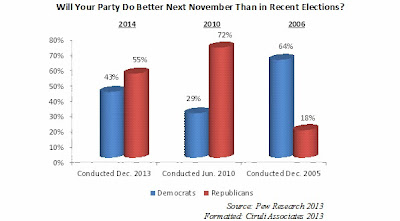 Republicans are aiming for six Senate seats and Democrats 17 House seats. Colorado’s most competitive race, as of today, is Mike Coffman’s sixth district. The good news for Coffman is that Republicans in Washington aren’t making his race more difficult beyond the handicap of being a member of Congress – a profession with a 9 percent approval rating.