Rick Santorum has now taken over first place in the national standings after his triple wins in Colorado, Minnesota and Missouri.
National polls now confirm what was clear in Colorado’s caucus events on February 7, it was primarily a competition among supporters of Santorum and Romney.
He has moved ahead of Mitt Romney and Newt Gingrich in the national polling average and in second place behind Romney in delegate count.
The next events are winner-takes-all primary in Arizona and a Michigan primary with proportional and winner-takes-all elements – both events are on August 28. 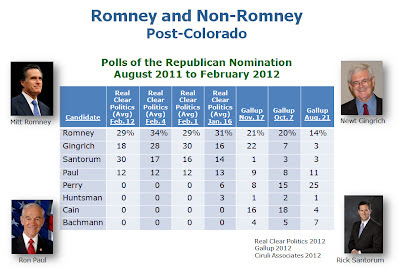