Although Mitt Romney has the bulk of the Republican establishment, most of the money and a plurality of delegates, the momentum has shifted to Rick Santorum after his three-state sweep. But, Newt Gingrich and Ron Paul are not likely to drop out, waiting for the next debate (Feb. 22) and Super Tuesday, March 6 (about 450 delegates in 10 states), making it still a three-way competition for the non-Romney vote.

The race now is for delegates – 1,144 – to secure the nomination, which, given the calendar and rules, is likely to not happen until May (only 1,621 delegates selected through April).

Santorum is the favored conservative at the moment, but there have been many. Although he has a message, it’s not clear he can put the money and organization together to compete in the super states’ primaries, such as New York, New Jersey, Ohio, California and Texas.

Gingrich stalled after Florida, but still has potential with a Super Pac and a host of southern states starting March 6 where he can try to apply his regional ties. But, the nationalization of the contest raises questions as to the breadth and depth of southern strategy beyond Georgia.

Paul will continue his movement campaign with selective wins, but he doesn’t appear to be affecting the race.

Romney, as of today, remains the frontrunner, but the image of frontrunner and establishment candidate, in fact, is a burden. He ran best in Florida, to some extent, because he was seen as the come-from-behind underdog.

Party leaders still believe that to beat President Obama will require a more centrist candidate, but they are clearly worried Romney may not be able to unite the party for the fall. 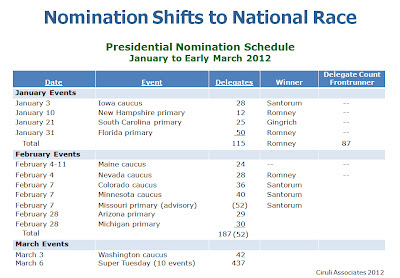