Hillary Clinton is now banking Colorado in her count to 270 electoral votes. The latest Quinnipiac poll shows Clinton beating Donald Trump by 10 points head-to-head and by 8 points in a four-way race with Gary Johnson, the Libertarian, and Jill Stein, the Green candidate.

In the head-to-head race, which is most useful in comparing internal differences, she’s consolidated Democrats (93% compared to Trump’s 86%) and is surprisingly winning men (45% to 43% Trump). White men she loses 40 percent to 47 percent to Trump, but she is winning 10 percent of Republican women. 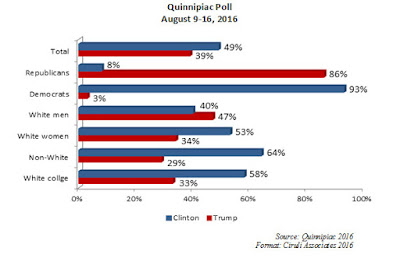 As noted by many analyses, she has a huge margin among White women (19 points), while he has a modest lead among White men (7 points). Her lead among college educated voters of 25 points is a new phenomenon, suggesting Trump has lost the old base of the Republican Party. When added with a 64 percent to 29 percent advantage among minorities, her current position is formidable.
Posted by Floyd Ciruli at 9:34:00 AM

Don't worry. Drumpf™ will surge ahead with tweets similar to this: "Some day, when things calm down, I'll tell the real story of @JoeNBC and his very insecure long-time girlfriend, @morningmika. Two clowns!"