Although national polls dominate analyses of the presidential election, in fact, the race will be fought in a series of states that history and polling show can swing between the parties and candidates. Politico, the online political report, is conducting a battleground tracking poll in eleven states.

On November 8, more than 130 million voters will participate and the winner will likely need 70 million to win. But, in fact, reaching 270 electoral votes will target only 40 million Americans living in the following battleground states.

At the moment, Politico has Hillary Clinton ahead 44 percent to 39 percent. Colorado is a listed battleground state, although it shows one of the wider spreads for Clinton. Most analyses now list Colorado as “lean Democrat.” In fact, Larry Sabato’s Crystal Ball report has just shifted Colorado from “lean Democrat” to “likely Democrat.” Donald Trump is behind in all eleven states.

Each state listed has five polls reported. However, some of the polls are three months old (see Politico polling average data here). 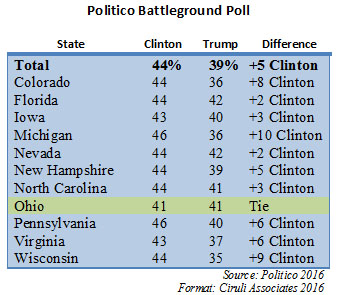 See The Buzz: Trump: Can he run a campaign with rallies and interviews?
Posted by Floyd Ciruli at 9:33:00 AM