Single-Payer in Trouble, But Many Voters Undecided

A new Ciruli Associates statewide poll tested the single-payer health care proposal and the so-called Raise the Bar initiative. Upwards of a third of voters are unfamiliar with and uncertain on how they will vote on the two initiatives as the election season approaches Labor Day.

The ColoradoCare initiative is losing 30 percent to 45 percent, with a quarter of voters (24%) undecided on how they will vote. This result is similar to a Ciruli Associates poll in June in the Denver metro area (56% of the state’s voters). Proponents have made no progress and, in fact, Democratic Party support essential for them to have any chance has fragmented in recent weeks.

The Raise the Bar initiative to change the way the state constitution is amended is mostly unknown to voters, with a third (33%) stating they don’t know how they will vote. Among 67 percent who have a view, the proposal is winning by 9 percentage points (38% favor vs. 29% against). 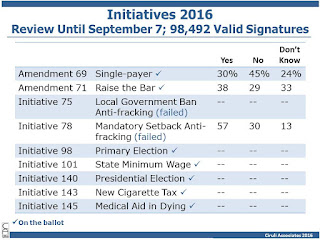 Although the anti-fracking initiatives failed to make the ballot, a test of the mandatory setback language indicates that voters were willing to pass it on a first reading. The failure to gather sufficient signatures reflects the diminished local passion and lack of out-of-state money that might of helped pay for professional signature gatherers. Needless to say, if it had made the ballot, there would have been a powerful campaign in opposition.

There will be seven initiatives from voters on the ballot and two housekeeping-type amendments from the legislature.

The survey was conducted from August 7 to 16, 2016, with 712 Colorado voters by Ciruli Associates. It has a margin of error of ±3.7 percentage points.