Millennials are Avoiding the Parties and Their Candidates

Millennial voters (aged 18 to 34) are identifying with independent political status and are giving near majorities of their votes to independent presidential candidates.

In a statewide Ciruli Associates poll, 38 percent of Millennials identify themselves as independent more than any other age group and nearly equal to the number who claim to be “strong Democrat” (29%) and “not so strong Democrat” (11%).

The Colorado results for minor party candidates among Millennials were larger than what was nationally reported as the Millennials’ preferences (46% in Colorado to 28% nationally) in the latest Pew Research poll where Clinton was ahead of Trump by 4 points. (Different cut-off point in age explains some of the difference, but not all.) 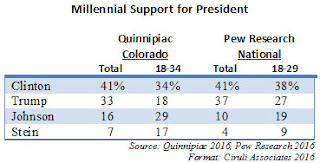 In general, Johnson voters are younger, White and more independents. He tends to attract more Republicans than Democrats.

Nate Silver’s analysis of a half dozen recent polls of Millennials show Johnson getting 17 percent or nearly double his current average of 9 percent from all voters. 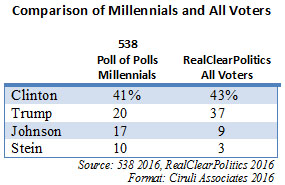