The State Legislature Interim Water Resources Review Committee meeting in Steamboat Springs heard the results of a new poll sponsored by the Colorado Water Congress and the Colorado Water Conservation Board that Coloradans support many of the key elements of the state water plan, including investing money in conservation, reuse and storage.

The results of this survey were compared to a survey conducted in 2013 for the Colorado Water Congress, which focused on the Public Trust initiative. The goals in 2016 are more proactive and identify those factors important to the public to help implement the state plan.

In reporting the survey, it was pointed out that opinion has shifted from drought and water shortages in 2013 to water quality in 2016. 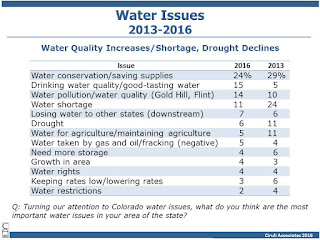 Only about 19 percent of the public had heard much about the state water plan, but 40 percent believe the state should have a planning role and the plan was rated as favorable by most of the 47 percent of the public that could rate it (72% “very” and “somewhat” favorable). When asked to agree or disagree with statements related to the water plan and implementation, the public believed claiming Colorado’s rightful share of water and protecting irrigated agriculture were essential principles. They also supported: 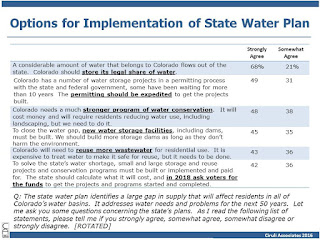 Voters also claimed to be willing to consider a tax increase to consider funding a package of water infrastructure improvements.