Crisis of the Republican Party

Colorado began the century with two competitive political parties, but after two decades the Republican Party lacks a significant statewide office holder. The defeat of Senator Cory Gardner in 2020 marked the last Republican holding statewide federal office. Since 2018, the losses are now moving to state constitutional positions with all four offices, from governor to treasurer, being controlled by Democrats. The entire slate was just reelected by 10 points or more. Republicans are also falling behind in congressional seats (5 to 3), and they now lack a county commissioner in six of the seven Denver metro counties.

The direction of the presidential elections tracks Colorado’s evolution from a swing state to deep, deep blue with George W. Bush winning in 2000 by 8 points and Joe Biden’s 2020 victory of 13 points. 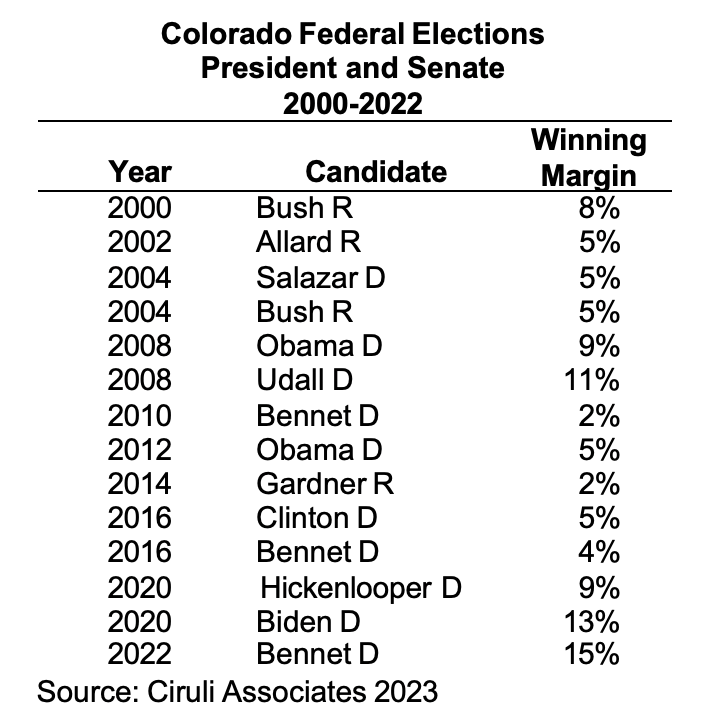 One of the most important factors to the Republican collapse was a group of wealthy liberals deciding to create a modern political organization with huge amounts of money, top tier consultants and political tools, and a strategy of partnership with allied groups. As cultural liberals highly interested in gay rights, they became the engine of a rebooted Democratic Party. The highest profile member of the group was Jared Polis, who was then a Congressman and is now the Governor.

The Democratic Party continues to be the better funded and organized. And of course, success breeds more success with control of issues, receiving more media coverage, a deeper bench, and more interest groups willing to donate. They regularly exceed Republican campaign expenditures two to one, including in 2022.