A common refrain is: “I’m so tired of the virus,” as the public wearies of the constant news of more fatalities and surges with frequent appeals for masks and social distancing accompanied by still closed popular venues. And indeed, polls record a narrow majority of Americans (51%) believe the worst of the pandemic is behind us, up 11 percentage points since mid-August (CNN, 8/28-9/4). But, still 57 percent of people remain worried there will be an outbreak next year. Also, more than half (58%) of the public know someone who has tested positive for the coronavirus and 75 percent are concerned they could get sick (Axios-Ipsos, 8/28-31).

These concerns are well placed. In the last 30 days, 40,000 more fatalities have been reported as Texas moves ahead of California for the third most deaths and Florida holds in fifth position. With more than 200,000 fatalities, the virus is not behind us. 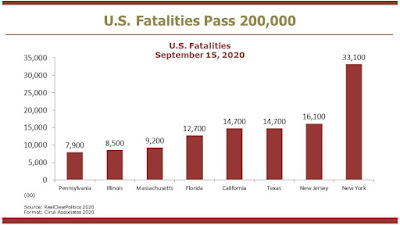 Unfortunately for President Trump, his reputation for handling the virus has not improved. Most Americans disapprove of his performance (63% to 36%) in three different polls, unchanged post the conventions. Also problematic for Trump (59%) is that a majority of Americans now have little or no trust in the accuracy of the information he provides. Also, trust in the CDC has declined from 83 percent in April to 67 percent in September.
Posted by Floyd Ciruli at 2:04:00 PM