Although there’s no post-Labor Day polls (as of 9-17-20), the three late August-early September polls had the senate race favoring John Hickenlooper by 5 to 10 points over incumbent Cory Gardner. The latest polls reflect voter opinion after millions have been spent since June by the GOP and its allies on negative advertising attacking Hickenlooper.
As of now, national political forecasters have placed the senate race in the “lean Democratic” category, with one exception, the Cook Political Report. Most recently, RealClearPolitics and Politico moved the race from “toss-up” to “lean Democratic.”

In a September 5 article, Joey Bunch in a Colorado Politics analysis speculates on the race shifting in favor of Gardner. The consensus from his interviews was that it was possible, but unlikely as the ballots are mailed on October 9, well ahead of Election Day. He wrote: “Time for changing hearts and minds is neigh.”
Bunch quoted me from a summer DU donor event:
“That 6 points is still a lot of ground to cover,” Ciruli said, noting that Gardner must support a president consistently polling around 13 points down in Colorado.
“His challenge is to get this in a one-on-one race with Hickenlooper and get people to think of this as a choice between them, because he’s a good campaigner and he thinks he’s had a good six years,” the veteran pollster said.
He expected the polls to tighten after Labor Day, when pollsters focus on the “likely voters,” instead of those less engaged.
“And Biden could make a mistake,” Ciruli cautioned.
But the polls haven’t narrowed sufficiently to change the forecasts tilting against Gardner running with a president that is consistently 10 or more points out. 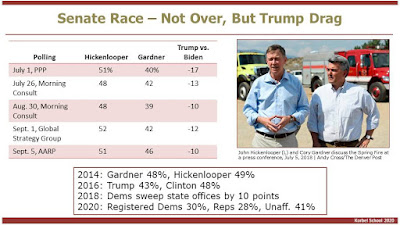