A top Democratic polling firm, Greenberg Quinlan Rosner Research (GQR) just released a Third Congressional District poll that showed the race is tied (43% Mitsch Bush to 42% Boebert). It was a bit of a surprise. The district was judged to lean Republican because of recent wins by the incumbent Congressman Scott Tipton and Donald Trump’s 12- point win in 2016. The recent history would likely still give Republicans an edge in the district. But, the fact President Trump is also tied with his Democratic opponent, Joe Biden (43% each), this becomes a race.

Neither candidate is well-known, except for extreme images argued by partisans. Diane Mitsch Bush is labeled a “socialist” due to having support for Medicare for All and Democratic positions from her 2018 run. Lauren Boebert is a gun-toting, strong Trump supporter who’s made reference to QAnon. If the presidential race is close in the Third Congressional District, an “extremist” label is unhelpful. If Boebert avoids it, she’ll have the advantage because of her public relations skills and Trump-like positions. But, in a Democratic dominated House, having a pragmatic Democrat may be the preferred choice. Expect major campaigning with millions spent. 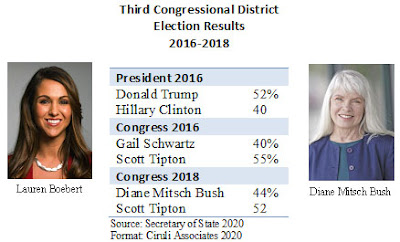 Read The Buzz:
Tipton is Gone. Can the Republicans Hold the Seat?
Posted by Floyd Ciruli at 2:51:00 PM