Trump May Like Tea With the Queen, But are Brits Up for Trump?

A new Ipsos MORI poll shows three-quarters of the British public (76%) has an unfavorable view of Donald Trump, that’s about 20 points higher than the U.S. public that give Trump both an unfavorable and a disapproval of his performance of about 55 percent.

And, the British would prefer Joe Biden to win the presidency by 69 percent to 12 percent for Trump, again, 20 points higher than in the U.S. where polls put Biden about 50 percent over Trump. 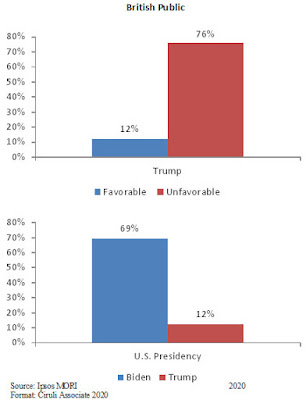 Do they get to vote in our election?