Obama Wins Colorado, But Closer Than 2008

1.  Obama targeted the right states.  Colorado was fifth closest among the top nine states he targeted. Joining Colorado in the top five were Florida, Ohio, North Carolina and Virginia. Obama won 8 out of 9, only losing North Carolina.  Mitt Romney mostly adopted Obama’s battleground states, but added Pennsylvania.  He lost it.  It ended up in sixth place. Rounding out the top ten after Pennsylvania were Iowa, New Hampshire, Nevada and Wisconsin. 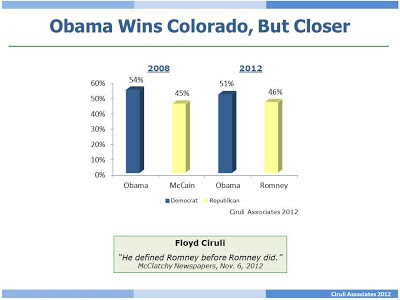 2.  Colorado turnout was slightly above four years ago, from 2.4 million to 2.6 million.  Eighty percent of voters voted early; hence, only about 500,000 voted on Election Day.

3.  As a battleground state, Colorado saw record-level visits from the candidates, started by Obama early in the 2012 election season. Heavy advertising began in May, as soon as Romney was designated the presumptive nominee.  It was mostly from Obama and negative related to Romney’s Bain Capital record.  Between the Republican primaries and the early Democratic advertising, Romney never recovered his reputation and lost every test of favorability or empathy with voters.

4.  Obama assumed the state would be close and was never confident it had been put away.  He visited the last week. Advertising continued through Election Day even though 80 percent of the vote was in.
Posted by Floyd Ciruli at 3:41:00 PM