Final National Polls: And the Winner is Obama

The final national polling figure shows the head-to-head polling trend during the campaign.

1.  Obama was ahead by about 2 points consistently all year.
2.  Obama remained ahead in May and June after bad job reports. 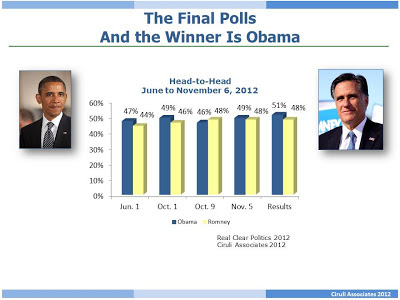 3.  Obama was ahead by 3 points on Oct. 1.
4.  Oct. 3rd debate changed the big picture and Romney moved ahead slightly for 21 days from Oct. 9 to Oct. 30 in the overall national polls.
5.  Obama returned to lead last 7 days.  Romney saw momentum in crowds, but Obama won final debates, economy showed life and Sandy stopped Romney’s campaign.  It added points to Obama over the final weekend as he got to be presidential and look bipartisan.

6.  Obama was ahead in national polls on Election Day.  He won by 3 points as late votes counted in California added to his margin.
7.  So, preparation for election night analyses was that Obama appeared slightly ahead in the popular vote, but he continued to dominate the electoral vote in 7 of 9 battleground states.  Romney had shown final momentum, especially pre-Sandy, but it appeared to fade.  Romney’s people appeared strangely confident given the public polling data.
Posted by Floyd Ciruli at 2:39:00 PM