The map of Election Day displays the final state-level polls on Election Day in twelve toss-up states – nine original and three additions (Pennsylvania, Michigan and Minnesota) selected by Romney as he realized his long odds in Ohio and other states essential to get to 270 electoral votes.

1.  The final Election Day projection was for an Obama victory, with 303 electoral votes.  He won 332. 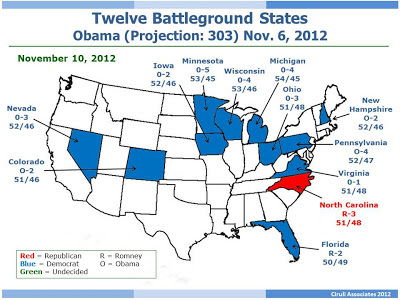 2.  Romney’s campaign polling operation and a few Republican and Republican-leaning pundits insisted that the state-level polls were wrong.  Their in-house polls allegedly showed Romney leading in sufficient states to win the Electoral College, including Virginia, Ohio, Iowa and Colorado.
3.  Virginia was the first major battleground state to report results on Election Night, and it went for Obama by 3 points.  It has swung back and forth in the polls the last few weeks, but had Obama up 1 point on Election Day.
4.  Obama’s campaign developed its battleground strategy in 2011 and the 9 states he selected, plus Pennsylvania, were indeed the ten closest states.
5.  Democrats, since President Clinton’s 1992 and 1996 victories, have built a base of reliable Democratic voting states with a combined electoral vote of about 220, whereas the Republican base has contracted to about 190.  Hence, G.W. Bush’s electoral vote victory was a very modest 271 in 2000 and 286 in 2004.  Obama won 365 in 2008 and 336 this year.
Posted by Floyd Ciruli at 9:54:00 AM