Colorado acted like the quintessential toss-up state.  State and national polls were closely synchronized, with Romney consistently behind Obama until Oct. 9 when he held the lead for 20 days following the surge after the first debate.

1.  Final Colorado polls showed the President winning by 2 points. His margin was 5 points, a little over half the advantage of four years ago (9 points). 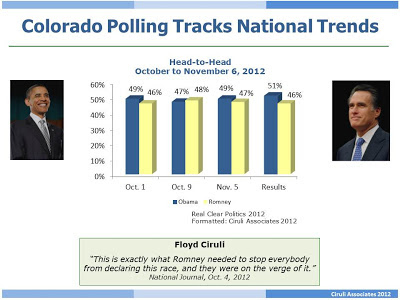 2.  After the Oct. 3rd debate, the next round of polls put Romney in the lead for the first time all year. Romney was judged having won the first debate by 72 percent of the public. It charged up the Republican base and stopped pundits and the more attentive public from giving up on his race.

In a total of 56 Colorado polls reported on the Real Clear Politics website, Romney only won 12, and 8 of those were after October 3. Romney’s apparent momentum faded on Oct. 29, reflecting attrition from average debate performances and the relentless activity of the Obama campaign.

3.  The President surged the last week, no doubt reflecting the positive media coverage of his performance during Hurricane Sandy and late deciders moving to him. Final weekend polls gave to him 3- to 6-point margins.

4.  A key question will be if the Democrats now believe the state is secure because they are winning the biggest races and are doing it with groups growing in the electorate.
Posted by Floyd Ciruli at 9:52:00 AM