Gay voters and the gay agenda were big winners in the 2012 election. President Obama endorsed gay marriage in May, which provided a significant boost. Gay marriage now has majority support among Americans. (Gallup reports 53% support it.  Pew says 49% support.) In a PPP April poll, 53 percent of Coloradans said they supported gay marriage.

But, its biggest victory came on Election Day when voters in three states approved gay marriage after more than a decade of approving bans. Maine, Maryland and Washington State said yes to gay marriage and Minnesota rejected a constitutional ban. 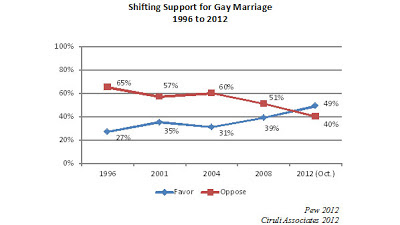 Lesbian, gay, bisexual and transgender (LGBT) voters said they were voting overwhelmingly for Obama (71% vs. 22% for Romney) as opposed to the non-LGBT community, which in an October 18 Gallup poll gave Romney a one-point advantage (47% Romney vs. 46% Obama). The LGBT community provided Obama support equal to the Latino (71%) and Asian American (73%) communities.
Gallup reports 3.4 percent of voters say they are LGBT. They are most likely to be liberal than others and slightly more Democratic than independent.