Competitiveness has become a new criterion for state court judges in congressional redistricting, and Democrats won big arguing for it before Judge Robert Hyatt.  The seven new districts now give Democrats a chance of picking up two additional seats during the expected 2012 competitive presidential race in Colorado.
Sal Pace, the very liberal, labor-oriented Pueblo Democrat, picked up just enough new liberal Democrats to tilt the competitive 3rd CD away from freshman incumbent Scott Tipton.
Mike Coffman, the Republican incumbent in the Denver suburb’s 6th CD, now has a much more competitive district centered in Aurora.

Other big winners in redistricting were the City of Aurora, which will now dominate the new 6th CD, and Latino voters who pick up influence in the 3rd CD and the newly redesigned 6th CD by adding north Aurora. 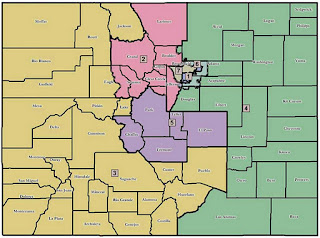 A loser is Democratic Senate President Brandon Shaffer who wanted to challenge freshman Cory Gardner in the 4th CD.  Shaffer was a longer shot than Pace due to Gardner’s political skills, but in the new 4th CD with Douglas County, he has no chance.
Denver Democratic Attorney Mark Grueskin has become one of the nation’s premiere election lawyers.  He wrote the Democratic brief that Judge Hyatt added a few pages of introduction and then adopted.
Posted by Floyd Ciruli at 9:54:00 AM