CNN Says Ten Competitive Senate Seats in 2022, Bennet Not Much

The senate races of 2022 will be a battle for control of the evenly divided body. Democrats will be at risk in an off-year election that historically are difficult for the party newly holding the White House.

A recent analysis by CNN lists the 2022 senate seats by their expected level of competition, and Michael Bennet is considered safe. The top ten seats are divided evenly between the two parties. The Cook Report agrees. 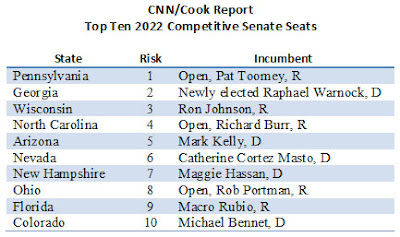 Democrats want to hold what they have and possibly add the open seats in Pennsylvania and North Carolina or defeat hyper-conservative incumbent Ron Johnson of Wisconsin. Democrats have a number of vulnerable seats up, but are most concerned about winning a repeat of the Georgia race for newly elected Senator Warnock.

Based on recent voter behavior in Colorado and the Republican Party’s post 2020 disarray, none of the national observers believe Michael Bennet is above tenth on the list of ten most vulnerable seats.

See Colorado Politics: Is Michael Bennet Safe or is 2022 an Upset Year?