A new poll from Ipsos shows that Baby Boomers, who from the mid-1960s were the generation of political and cultural change and activism, now represent the conservative norms compared to the newest Generation Z and Millennials (groups about 40 years old and younger). 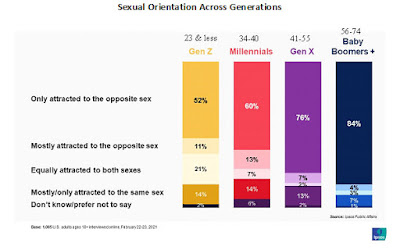 With gay marriage and transsexual rights generating considerable political controversy, age will be a major predictor of behavior and attitudes.

Just because I am an old fart male who is only attracted to females does not predict my attitude towards homosexuals nor transexuals.
My attitude is "whatever".

Online Medz Pharmacy is a website that provides various types of medications. We help the persons who are suffering from some severe diseases like sleep disorder, ADHD, Weight loss, pain relief and anxiety disorder by providing them Xanax, Vicodin, Tramadol, and other drugs. We have all types of Generics and brands of medications with several strengths.