Former President Donald Trump began his CPAC speech with one of his rhetorical questions about how much he’s missed. Trump has always been needy about being loved, or at least judged as entertaining. But, a number of new polls suggest the American people have moved on to less entertainment and more accomplishment on the virus and the economy.

President Joe Biden, who is much less a daily media presence in online or mainstream media, has a win in his first 50 days greater in size and reach than Trump or former Presidents Obama or Clinton. He’s also getting high credit for his unprovocative tone.

The Associated Press’s latest poll with NORC (Feb. 25-March 1, 2021) is headlined, “President Biden’s Honeymoon Continues.” Biden received high grades for overall performance (60% approval) and specifically for handling the pandemic (70%), health care (58%), race relations (61%) and the economy (55%). Although Republicans were mostly negative, even they gave Biden 44 percent support on dealing with the pandemic.

But most importantly, independents, who are the voters that swing approval ratings positive or negative and seldom offered Trump support, are consistently on the positive side for Biden (independents for Biden overall – 57%, pandemic – 61%, health care – 58%, race relations – 57% and the economy – 56%). 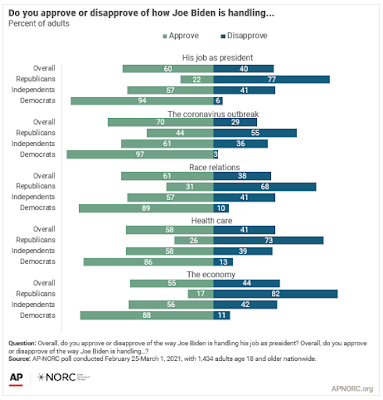 And finally, a measure of the longing for a Trump comeback at this point is the change in voter sentiment over the country’s direction. Today, a high of 48 percent say the country is heading in the right direction, up from 27 percent in September before the election.