Nancy Pelosi recently launched a twitter when she appeared to say she didn’t aspire to be speaker again. Was this admitting Democrats are unlikely to pick up 16 seats to win the House in 2014 or was she ready to go home regardless of the outcome? Pelosi immediately clarified that she was only saying her personal ambition is not the issue, rather success for the Democratic majority.

President Obama’s fading public support makes winning the House even less likely than history would suggest. But, presidential approval is volatile. If Syria turns out well for him, there could be a “rally effect.” If it goes south, he could lose five points in a very short time. 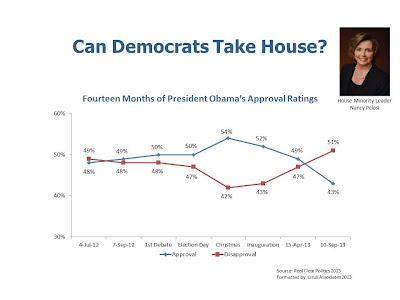 This blog correctly predicted Democrats would not win back the House in 2012 after their loss in 2010, but has been repeatedly wrong predicting that Pelosi would give up leadership. She retained it in 2011 and 2013. Her caucus, which is overwhelmingly liberal, loves her and, as she just demonstrated, she will raise funds for her team, like Mr. Romanoff in the contested 6th CD.