Cory Gardner needed a poll to show that, despite Donald Trump’s chaotic reelection campaign, he still has a chance in Colorado. It would have been disastrous to go into Labor Day down double-digits to John Hickenlooper. Final money from the national Republican Party, big PACs and dark money sources will get very competitive given the risk to the control of the Senate.

The poll was conducted by Morning Consult with 616 likely Colorado voters from July 17-26, 2020. They also polled in Arizona, Georgia, Michigan and North Carolina. Although the poll provides a lift for the Gardner campaign, it still highlights the challenge of running in tandem with Donald Trump.

The President is 13 points behind Joe Biden in Colorado. He is approximately 6 points lower than his national RealClearPolitics position as of August 3, 2020 (42% Trump to 49% Biden). It suggests that, even if he closes the race nationally, he will still be significantly behind in Colorado. Biden is at 52 percent, or 4 points ahead of Hillary Clinton in 2016 in Colorado (48%), and Trump is 4 points behind his result (43%). 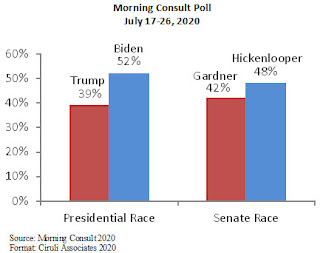 Both Hickenlooper and Gardner have their base voters’ support (87% Democrat and Republican support for each). Hickenlooper’s principle advantage at this point is among self-declared independent voters who claim to support him 48 percent to 35 percent for Gardner, a 13-point advantage. The ranks of independent-type voters have always been large in Colorado, but in a recent surge, they have gained many new residents and younger voters who have been mostly voting Democratic in partisan races since 2018.

The Hickenlooper and Gardner contest compared to the other four states’ polls is near the middle. Democrats are strongest in Arizona, with popular former astronaut Mark Kelly beating incumbent Republican Martha McSally by 16 points. Biden is up 7 points. Republicans do best in Georgia where Trump is only down one point and Republican incumbent David Perdue is up 3 points. In North Carolina, the presidential race is tied at 47 percent each, but Democrat Cal Cunningham is defeating incumbent Thom Tillis by 9 points. Michigan, which Trump barely carried in 2016 to push him over the top in electoral votes, is now a bust. He’s down 10 points to Biden and the Democratic candidate incumbent Senator Gary Peters is up 14.
Posted by Floyd Ciruli at 11:40:00 AM